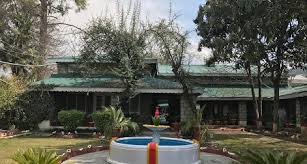 Abbottabad was founded and named after Major James Abbott in January 1853 as the headquarters of Hazara District during the British Raj after the annexation of Punjab. He remained the first Deputy Commissioner of the Hazara district from 1849 until April 1853. Major Abbott is noted for having written a poem titled "Abbottabad", before his return to Britain, in which he wrote of his fondness for the town and his sadness at having to leave it. In the early 20th century, Abbottabad became an important military cantonment and sanatorium, serving as the headquarters of a brigade in the Second Division of the Northern Army Corps. The garrison consisted of four battalions of native infantry, of the Frontier Force (including the 5th Gurkha Rifles) and two native mountain batteries.